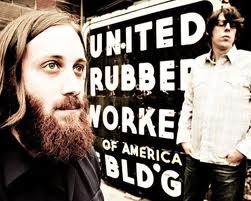 These guys. The Black Keys. I think I may love them, finally.

I’ve always had this “No Blues Unless the Singer’s Black or it was From the 20s” policy.

For that, I blame Stevie Ray Vaughan. I will probably offend blue purists everywhere when I say that SRV, while talented, didn’t typify what I call “The Blues.” Even if he grew up in Oak Cliff outside Dallas. He’s missing something, and maybe it’s like what Wesley Snipes said in “White Men Can’t Jump”: SRV doesn’t hear the blues (or Jimi Hendrix.)

That’s probably because my mama raised me on really old blues, bluegrass, country blues and gospel, such as Leadbelly, Robert Johnson and Mississippi John Hurt, Bill Monroe and Marion Williams, Emmylou Harris, The Whites, Ricky Skaggs and of course, my personal hero, Leon Russell. I have this aversion to that really electrified blues. I realize this probably means real music critics think I’m dumb. But hey, I’ve never been to one like something because someone else did.

Which is why I usually am not the first to jump on a band because some kid in tight jeans and my Nana’s glasses told me I should. Case in point, the Black Keys. I was hesitant, even when people I really respect were lining up to get tickets to their Tulsa show last year. They were playing way too close to the shows of Ween and the Pixies, so I didn’t bother getting to know them and trying to see them. (Side note: I review a lot of shows for work, so I typically only pay for tickets to shows I really, really, really want to see… like Ween, which I would drive to Istanbul to see if I could. My favorite band ever. And the Pixies, which I’ve seen twice now, are another one, though they only get back together and tour when Frank Black thinks someone’s forgotten him.)

But lo and behold, this week I was bestowed with the Black Keys collection from a friend. And I started at the beginning, with “The Big Come Up,” and despite the fact that I know a lot of these songs from various commercials and TV shows, I gotta hand it to them. They break both rules:  They’re white, and definitely not from the 1920s. But they get it, and I think I might have to forever incorporate them into my rotation. And I’m only halfway through their discography.

They give me a  little more faith in modern music, which I struggle with. I try to listen to new bands, really I do — I bought Temper Trap, Passion Pit, Cold War Kids… and I think they’re all pretty good. But I don’t crave hearing them. I crave Bob Dylan, Ween and Bruce Springsteen, Jane’s Addiction, Cracker and Soul Coughing… and Mike Doughty (pretty much every day… how I wish I could meet someone like that guy. He’s my ideal. Sigh.)

I think I might end up craving the Black Keys, as well as another band I’m just now getting into, Alberta Cross.

I don’t ever want to be one of Those People who have to be first, the ones who thwart their latest hot-mess mp3s on you, giving you its  description like they’re selling you wine. “It’s got a bit of a Led Zeppelin finish, with the legs of Debbie Harry, but with notes of Duran Duran…”