Save us, David Lee Roth! Only YOU can Make America Fun Again.

Lean in, Millenials and the Next Named Generation – I’d like to tell you about a magical period known as “The Mid to Late 80s.”

I’ve been thinking about this glorious time for weeks, but it was really hammered home to me yesterday, when my tiny Connecticut town hit a new low for March – 3 degrees with a negative-teen windchill. And what did my Google Play decide to thrust into its shuffle?

This is not fair.

When I got over crying, I got inspired. So now I have to share the Good News of Van Halen and David Lee Roth.  Gather ’round!

For the young or uninformed, or shall I say “yoUNgInformed”: David Lee Roth is a retired magician, capable of lightening any mood — that’s his skill. He was sometimes referred to as a “rock star.”

People like DLR and his magician’s assistants/other members of Van Halen are rare nowadays. You see, somewhere in the gothy, nevermind-whatever-I’m too cool for this-90s, we lost track of these people, and they nearly went extinct, we thought.

Turns out, they just went underground. DLR is still very much alive, and you can even see him sing his little songs and incantations on stages sometimes, and often with is former friends in Van Halen, when they’re not in some sort of recovery. (Kidding EVH – I’m proud of you for getting clean!)

So I want to help our yoUNgInformed, who say things like “I wasn’t born when that came out so how could I ever know it” even though they’re the first generation to have lifetime WiFi and Google privileges. That excuse is so tired, I can tell you don’t even believe it. You just weren’t raised right. Let me help.

You, too, can learn to point your browser back to the 80s – back to when MTV ruled the world with these little five-minute masterpieces known as “music videos.” The name itself almost conjures up that crackly, standard-definition plagued TV sound that came out of just two little speakers and no surround sound, much less a Bose soundbar or other high-falutin’ accouterments.

Some of the TVs were still black and white. Did you young’ns know color didn’t exist until the 50s, like AT ALL? Pepperidge Farm remembers…

Yes, there were these little mini-TV programs that used to occupy all our time while we waited for iPhones to be invented and for your brilliance to fill us with so much hope that we finally feel complete! (Just kidding, we’re Gen X. That’ll never happen.)

But among the most notable was David Lee Roth’s magical epoch – roughly 1983 to 1988. It was a time filled with scandal, outrage, old-ass presidents and rich people being paraded about like circus animals that we were supposed to want to be like.

It was a greedy time, and it led to a lot of assholes wandering the earth. But you can’t blame my beautiful Gen X for that one. That was the boomers. We Xers were just trying to find a quiet place to get away from those jerks. Hence our saturation of the world in flannel and emo in our first act as Ruling Generation. Which sort of set the whole fun 80s thing back forever. So yeah, it’s my duty as a proxy from the Fun Killing 90s to inform you of the fun time before it. 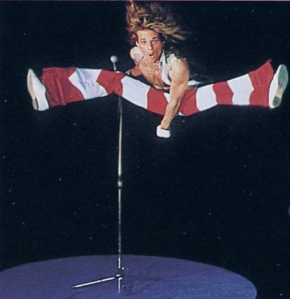 Sorry we killed your mojo, DLR. The 90s would like to formally apologize.

In that time, before we’d gone sour on the whole world and lost trust in everyone and everything, we believed rock n’ roll could save our mortal souls. And the Bible didn’t tell us that, but we didn’t care. For the first time, kids had access to SCANDALOUS stuff on TV. Women in bikinis, scrambled satellite feeds where you could almost make out nipples if you stayed on the channel long enough, and music videos.

David Lee Roth’s “California Girls” helped to establish some body shame for me, but it also made me happy. Goddamn. It was just FUN.

Fun for everyone. I watched that video no fewer than 357 times and I still marvel at its greatness. Somehow he made a bunch of beautiful women stand so still that at the end, I believed they weren’t real. Until that woman’s hand moved when DLR took the sunglasses out of it. Don’t act like you don’t remember. I’m remembering this, BTW, without having seen the video in 10 or more years.

But that was just the beginning for DLR. He went on to do the video for “Just a Gigolo,” which still makes me laugh. I quote it all the time and if people get it, I make them swear to be my best friend forever. (The sheepish looks of agreement are worth it.)

I remember this most: “YOU’VE GOT CHARASMA!”

Which leads me to the song that inspired these words: “Goin’ Crazy.” I don’t know if Google Play is trying to make me enjoy winter more or what – but it’s played a TON during The Cold Times. I heard it yesterday morning when my heater was struggling so hard to keep up, the house was still only 62 degrees. I laughed aloud. DLR, you did it again, you brilliant bastard. (Codpiece aside.) (No, not like that.)

Been in the sun too long.

I’ll prob’bly be here when that sun goes down.

I want to live it up, want to quit my job,

Tell the boss to go to hell.

I ain’t complainin’, you do the best with what you got.

I know you’re laughin’ ’cause it’s easy to tell

Get a load of that shit. It’s easy-peasy perfection. No women-hating, no violence, no threats, no demons, no promises of wealth—just “Hey guys let’s party.”

That’s an attitude we could ALL embrace. And even you Baptists.

I don’t mean let’s all watch Miami Vice and do lines of coke off each other. I just mean – let’s lighten the hell up a bit. Oh, I’m sorry Baptists – let it henceforth be knowneth that youeth should lighteneth the Effith Uppith.

(I was raised a bit Baptist, Episcopalian, Catholic and Evangelical but I also listened to Slayer. Pardon my jokes. I don’t mean them. God said it was cool.)

But it dawned on me yesterday morning that I take myself way too seriously sometimes too. My stressful job, which I’m grateful to have every single day, shouldn’t be treated like medical science. I help make sports TV, not do rocket surgery.

But David Lee Roth, and by extension Van Halen, have been on to something for decades. What started with “Running With the Devil” by VH – a song that sounds ominous but includes a slide whistle – turned into “Unchained” and “Atomic Punk,” then the ubiquitous “Jump,” followed by DLR’s only mopey love song, “I’ll Wait” (which is funny in its own way – such good photography!) and then my favorite, “Panama.” Then the masterpiece, if you ask 80s kids – “Hot for Teacher.”

DLR went solo shortly after all that. I remember hating that but loving all the DLR videos. How could you be mad? I mean, until Sammy Hagar came into the picture. But that’s another Van Halen blog that’s been written to death. (He was better than Gary Cherone but I digress.)

From “Goin’ Crazy” EP and then “Eat ‘Em and Smile,” we got “Yankee Rose” (“WELL LEMME ROLL UP TO THE SIDEWALK AND TAKE A LOOK HERE”… WOAH!) and “That’s Life” and DLR’s nearly-flawless version of “Tobacco Road.”

When was the last time an album that wasn’t by They Might Be Giants that FUN?

It’s been a good long minute. And DLR, we could use some of your charm now. You influenced so many bands in the late 80s – Poison, Ratt, all the sappy glam acts – but no one had your… well, CHARASMA. It’s time David Lee Roth comes out of retirement and makes a great solo album, or appoints a successor.

We somehow killed the fun out of the late 80s. Of course it probably had something to do with all that hatred, racism, anti-gay rhetoric, pearl-clutching, hypocrisy, woman-hating, war, poverty, neglect – all that shit. Stuff we’re wading head first into now. We’ve got wiretaps and Russians and presidential chaos – oh my – just like in the 80s. We need a resurgence of “I JUST NEED TO HAVE SOME FUN AND LIVE VICARIOUSLY THROUGH YOU” music. We need DLR.

Come on, DLR. Didn’t you have some kids or something? Get a band back together. Save us, David Lee Roth. You’re our only hope.

Unless you think maybe Eddie Van Halen should do it instead… (See, if I start a band fight, maybe they’ll have a public meltdown and then a very public get-back-together moment that could bring us a new version of “Hot for Teacher” or something… “Hot for Seniors” or something.)

Just, someone please make some good music. Someone, make a musical salve that can chill us all out and make us shut up and listen for a few minutes. Please. I beg of you, in the good name of Van Halen and other bands of their ilk. Save us from ourselves.

One response to “Save us, David Lee Roth! Only YOU can Make America Fun Again.”