Teach Your Children Well: Our history is important too!

THIS, friends, is Michael Jordan. ALL HAIL THE GREATEST.

The first thing I read this morning was a tweet about a fourth-grade class getting a visit from a grizzled sports reporter who covered Michael Jordan in his heyday. The kids had no idea who he was talking about, but the teacher proffered “He’s the guy who makes Air Jordans.” Everyone got it then.

While I can be accused of being a serial nostalgist, it’s ludicrous that this is happening. I don’t often get fired up and opinionated enough to blog about this, but COME ON people. We’ve got to do a better job of teaching our kids about our lives, our world, our mark on this generation. We’ve had some pretty awesome moments in pop culture, history, sports and more. It’s on us to encourage our kids to know more than what’s right in front of them.

I think it’s important because, right now, a lot of kids don’t seem to know their own parents’ history, much less what came before that – the Civil Rights Movement, women’s liberation, the holocaust, the suffrage, slavery, the Trail of Tears – it’s our job to teach them what we, and our ancestors, learned from each of those horrible things. It’s our job to teach these kids that there’s more to life than shoes – shoes inspired by a man who brought magic and majesty to a game. They’re just shoes. What led to them is what kids should know about.

Why are kids so fascinated by commercialism? Why is money, and the crap it can buy you, No. 1 in the minds of a lot of kids? Where are the artists? Where are the music lovers who, like me, hung on their parents’ every word on the subject? “Tell me about the Beatles,” I’d ask my mom. “I didn’t like them,” she’d say. “They were too popular.” (Yes, my mom was a hipster.) But I wanted to know about the 60s, and 70s, Led Zeppelin, Aerosmith – I asked my parents and they told me. Then they forced me (haha – not really) to listen to their music. I learned so much from songs like “For What It’s Worth” by Buffalo Springfield – songs that wrapped history in with the vibe of the time. Songs that made me want to live through that era, that gave me the willies, that mystified me. “White Rabbit” had the same effect on me – as did so many others. 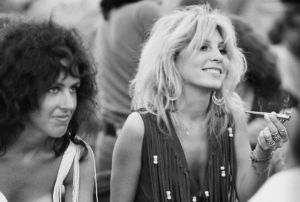 How can you not look at this picture and NOT want to know more? Grace Jones embodied cool. And I bet a lot of kids have never heard of her.

My dad bought me and my sisters each a copy of “Who’s Next” when we were kids. It’s one of his favorite albums, and now mine. My mother forced me to listen to Leon Russell and now he’s my hero. My little sister Anna knew every word (and had developed a dance) to “Closer to My Home” by Grand Funk Railroad when she was 3. All of us, along with my other siblings, learned pop culture through our parents, and it’s made us appreciative of their generation.

Someone – parents, teachers, communities – has to teach them about the past. They have to learn they aren’t the first people to inhabit this earth. They have to learn about their parents’ struggles and fights and rebellions and love lives. We have to show them why we were once cool! It makes parents relatable. It makes generations closer. My dad and I talk music a lot. He still inspires me.

There’s too much stuff out there now. We have to help our kids navigate the past, as well as the future. We have to give them an understanding of the past.

But this isn’t a new problem. A few months ago, Kanye West announced he’d be pairing with Paul McCartney for songs. Kids on Twitter went crazy saying this Paul McCartney dude was going to “blow up” when exposed to Kanye’s audience.

PAUL EFFING MCCARTNEY. The one who was more popular than Jesus fewer than 50 years ago. The one who, along with some other dude Kanye couldn’t make famous, have written some of the most well-known songs of my generation. How can they not be known by this one?

We can’t let our culture – our pre-cell phone and Internet culture – not impress the next generation. And I’m not saying they can’t be anything without us – but we should inspire them. We should guide them. We shouldn’t try to emulate them – we should try to help them.

Pop culture is spoken-word history. Songs, shows, movies, etc., are a sketchbook of our lives, and reflect what we’ve been through. Our kids need to know what we’re all about.

Don’t distance yourselves from that. Remember, you were cool once. Tell your kids about your past. They’ll love the stories. Play them some music, and tell them a story about when you first heard that song. My dad told me when I was a kid about listening to “Abraxas” by Santana as a teenager – what it felt like, the freedom he felt, what he was experiencing at the time, and how, when he hears it now, he’s back in that time. It made me listen to it, and I get it. I see my dad as a human being, someone who’s experienced things in his life – someone who had a life before me.

Teach your children well. Crosby, Stills and Nash taught us that. Now go play that song for your kids! And then play them some Led Zeppelin. Hearing “Stairway to Heaven” on my dad’s sound system at full volume when I was about 8 changed my life. There was a bustle in my hedgerow, and I was alarmed at first. But I realize now it was a spring clean for the May queen. A spring clean in which my parents planted the seeds to whom I would become. And as I wind on down the road, I am ever thankful.

Teach your children well. They need us too.