Vacation, how my family is the best, and my ESPN anniversary

You know those things in life that you don’t plan for, the ones you have no expectations for, that end up being some of the best times in your life?

I’ve had a few of them in the past year. I had a week of them last week. I sit here two days out of vacation still laughing at jokes and incidents from the vacay, the now-inside jokes my cousins and I shared and just the bizarre nature of my family.

I sit here looking back at my first year in Connecticut, still wondering how I got here, but pleased as hell that I’m here.

This is the kind of blog that’s going to take subheads. I’ve missed breaking those bad boys out – editors are so nerdy – so here I go.

Yes, I took this picture of myself. Yes, I’m wearing a hat. My Wicked Stepmother (haha) made me. The Waterfront is in the background — I’m standing on our awesome Big Dock outside the cottage.

I spent six days in upstate New York with my family, on Keuka Lake, in the gorgeous Finger Lakes region. My family has been going there forEVER and I’d only been once, when I was like 10 or 11. Living in Oklahoma and being a workaholic didn’t afford many opportunities for visiting upstate New York. Now, I look forward to going every year, or at least way more often.

Keuka, between Penn Yan Village and Hammondsport, N.Y., is where the water flows as well as the wine. Vineyards dot the landscape, which is replete with rolling hills and bluffs, vistas and meadows. Roadside fruit and veggies stands pop out of nowhere this time of year, hawking the sweetest corn you’ll ever taste. Mennonite wagons are plentiful, and signs warn you of upcoming buggies containing bonneted lasses and their bearded brethren.

The topography isn’t too different from Connecticut, and it certainly wasn’t any cooler outside, but being in the waters my grandfather used to fish was – well, it was inspirational and uplifting.

Not that I spent a lot of time pondering that while I was there. I hashed those thoughts over on the drive up and back. Most of the time in the cottage was spent laughing, boating, sunning, drinking and talking. I don’t drink that much anymore, but on this trip I would’ve made Charles Bukowski blush and Jim Morrison cheer. Our cottage was next door to a bar and a short distance from another bar. Not to mention my aunts, uncles and parents kept buying more beer. It was kind of perfect.

It started like this – my dad and my cousin John flew into Hartford, then I gave them a tour of ESPN. They got to meet Herm Edwards, among others, and John is a huge sports fan, so it was A DELIGHT (James Lipton voice) to see him and my dad’s eyes as we walked through my place of employment.

We left the next day for Keuka. We arrived later than planned, which is the way I like to road trip. My Uncle Jack (The Patriarch) rented a boat, and thus began a weekend of controlled debauchery, moonlight boat rides, ridiculous giggling, a little foosball and relaxation.

I spent a lot of time with John and his brother Ryan, who got there a few days later, but also got to spend scads of time with my dad, who is having surgery next week and with whom I was excited to spend time. (Note: My fam and I also had an extensive conversation about ending sentences with prepositions, so I’m trying to avoid that. Yes, we’re definitely related.) But that’s the way it typically works out – I always hang with my sisters and cousins most. I have a great bond with all of ‘em. I might’ve forced both John and Ryan to promise we’d do this when our parents are old. I might’ve been a bit drunk. But I meant it.

The bar next to the cottage, The Waterfront, was where Sunday night started and ended. They have this thing called Clammin’ and Jammin’, and a band played the early part of the night – one dude got so into it, he undressed, much to the chagrin of every woman in the place. Probably the men, too.

After the band went home, John and I sat outside the tiki part of the bar until we were invited by the locals to sit up front with them. John proceeded to tell everyone I work at ESPN, and then the night took a ridiculous (and somewhat embarrassing for me) turn. I answered all the questions, they bought shots, and then it all got kinda hazy. I took pictures of a fish John caught – I don’t remember taking the pictures, and it’s more of John’s drunken face and less of the alleged fish. He swears it flopped back in the water.

Somewhere in the middle of all that – before extreme drunkenness, of course — we went on a midnight boat ride with my uncles. Gorgeous.

We also visited the Switzerland Inn, or the Switz as it’s called, a place of legend among my family and where Ryan nearly got into a fight with the biggest, dumbest dude I’ve ever seen. Ryan was just being a smartass, as usual, but apparently you don’t poke the local bear. I do not doubt Ryan’s toughness, but he’s far too pretty to get his face bashed in. I thought I was going to have to do some fast-talking.

I also met or was reintroduced to the Troll side of my family (yes, that’s a family name – you shan’t make fun). They live all over Alaska, in New York, in Texas, in Seattle – all over the place. I’d met a few of them, but certainly not all. Of course, we had a great time. They are a fabulous bunch of folks. They stayed across the lake, and we boated over a few nights for excellent dinners, beer and wine tastings and conversation. The first night was a tribute to one of the Troll sisters who died in December. It was touching and sweet, and even though I’d never met Mimi, I felt her presence and, me being me, I cried.

What surprised me about the whole trip was that I hadn’t really thought about it before I went. Work had been crazy, I’d had a lot going on there, and I didn’t let it build up in my head. I think that’s what made it so great – it was an unexpected six-day pleasure trip. And honestly, my family is just so fun and so goddamned goofy. We’re excellent conversationalists too. It was one of my better vacations.

My year anniversary at ESPN 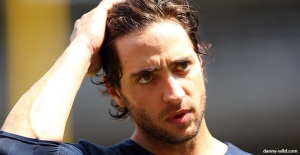 The day before I left Keuka, Aug. 1, was my one-year anniversary at the Worldwide Leader. I’m still in love with my job. Most days I leave with a smile on my face. I hope they like me too – I want to stay there as long as they’ll have me. I feel like I’ve found what I was looking for on the workfront (still waiting for Ryan Braun or one of his brethren to realize they need a short, pleasantly plump Shiksa woman to make their lives complete, but that’s another blog).

I think ESPN might be my lifeline. I had to do it. People say I’m brave for packing it up and moving away, but I think it was a foregone conclusion. I had to do it, and I’m not looking back, especially when it’s 111 in Oklahoma today!

Over the past year, I’ve been afforded so many opportunities to be amazed, pleased and to excel. It’s been a busy, crazy, intoxicating year (not in the aforementioned beer-y way, though). I like to say that on Oct. 9, 2011, Tim Tebow was named starting QB of the Denver Broncos, and Joe Paterno was fired from Penn State on Nov. 9, 2011, and it’s been nine kinds of crazy ever since. And that brings me to…

The bureau meeting
Without getting into a lot of organizational chart-job title-ESPN insider info stuff, suffice it to say there are a lot of mega-talented folks at ESPN, many of whom roam the countryside with microphones in hand, stopping at sporting events to report what’s going on. If you’re a sports fan, you’ve seen these people on TV. They are bureau reporters, and once a year, they and their requisite bureau producers converge in Bristol for a few days of workshops, etc. I got to take part in these workshops this year, as I work hand-in-hand with these guys every day. I had talked to them all on the phone, but only met a couple face-to-face. It was an exciting day for me – to be surrounded by so many talented, hard-working people who have the same ambitions in life as me, the same work ethic and the same drive. It was another one of those “is this real life?” moments.

We all met for dinner one night, and I sat at a table filled with pedigree and talent. At the table was Vince Doria, senior vice president and director of news, who is a down-to-earth, unassuming and brilliant man. Also at my table were reporters Jeremy Schaap, T.J. Quinn and Mark Schwarz. If you’re not a sports fan and don’t know those names, trust me, they’re good. And hilarious. I laughed all night and felt included in the club. I am honored to be a part of ESPN, thrilled to be a part of all that talent, and overjoyed that I’ve been given so many blessings in life. I don’t know if I deserve them all, but I’ll always be grateful.

Losing weight
I’ve turned a corner in my thinking, and even though I have a condition that doesn’t make weight loss easy, I’m going to work hard. I just want to be healthy. I got the happy part down, but I want to be healthy enough to enjoy this happiness for a long time. I lost three pounds on vacation – I’m proud of that. I think I’ve finally realized that it’s not a diet I’m on, but the rest of my life being healthy. I spent the first 36 years (give or take a year or two) eating whatever I wanted and not exercising religiously. I’m so proud of my cousin John, who never really had a huge weight problem but inherited some of the Hart genes. He’s worked his ass off and he looks fantastic. He and my fabulous father continue to be inspirations.

So to recap, things are going pretty good for me right now. Except for the whole no-Jewish man thing. I’m still working on that one. Wish me luck, even though I feel guilty asking for anything else! 🙂