I could be called the World’s Biggest Perry Farrell apologist — but even I couldn’t make up excuses for his last project, Satellite Party — just not my kind of party. Members of the Beastie Boys probably kept their respective penises out of the mashed potatoes whilst hearing it. (It’s Beastie Boys humor. If you don’t get it, Google it.)

But my love for the Big Three Jane’s Addiction albums — the first self-titled live album (which I consider a full album, since it contains so many songs you can’t find elsewhere), “Nothing’s Shocking” and “Ritual de lo Habitual” — is never-ending and deep. It’s a love that began on my BFF’s bedroom floor in 1988. I heard the opening strains of “Up the Beach,” fell in love hard and instantaneously, and was buying the live album a few weeks later, waiting on tenterhooks for “Ritual” and buying it the day it came out, with the banned and now-available cover art… the insert in the cassette with the lyrics and heroin-fueld diatribes of band members… Damn I loved being a weird kid. I still love being a weird kid.

Then JA broke up, and no one was surprised, because Dave Navarro had lost his mind and went to hang out with the only band with more heroin baggage than Jane’s, the Chili Peppers. Plus, Perry seemed to be going kind of off the deep end, though I guess he really wasn’t.  (Side note, Navarro’s joining of RHCP, sadly, was when I really  started hating RHCP — and that’ll never change. They’re just dead to me, though their first four albums aren’t.) Eric and Stephen just kind of shucked along, doing albums with Infectious Grooves, Polar Bear, Banyan… and Perry did the Porno for Pyros thing… it reminded me of when I was a kid and Duran Duran broke up. I grieved, but bought the new stuff happily. 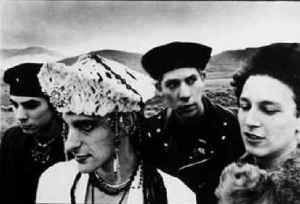 Nothing's Shocking is sublime. It is perfect. It is beyond measure. It'll never happen again. "The Great Escape Artist" is good, however, even if it does make you go back and listen to the old stuff afterward.

But back to my welcoming back of JA. The new album, “The Great Escape Artist,” is GOOD. I’ve read reviews that panned it — but I don’t think they get it. This is undiluted JA –whispery weird and whiny Perry lyrics, meaty guitar hooks, spooky/sexy/indulgent percussion — Stephen Perkins is the finest drummer of my generation, bar none — and, while more produced than past efforts, a revisit to the coolness that I first hungrily supped in eighth grade.

But imma let you freaks off with a warning: It’s not “Nothing’s Shocking.” That quality of album just won’t EVER happen again. This’n 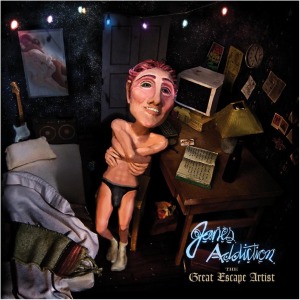 is a grown-up but still cool JA. It’s more reminiscent of that sound, but it’s not 1988 anymore. They’ve made quality albums since then, each a bit more different. I love the Porno for Pyros albums almost as much as I do the JA albums, but they’re not Nothing’s Shocking. I/we/they can never recapture that magic. They make a different kind of magic, and I like this new effort enough to give it several turns of the disc and not just put it on my iPhone and listen to tracks. I’ll listen to the whole thing. “Strays” didn’t give me that — so I’m glad to have that back. I’m a fan of album rock, and JA and the Pixies were the kings of whole-album rock until grunge came along…

(Side note 2: I love that I believe my era is the best and can’t be topped. I have officially reached a music nirvana, no pun intended. Mine’s better than yours, kiddo.)

I have grown up with the band — maybe that’s why I’m attracted to this more mature effort. I didn’t love “Strays,” though it had its moments, but GEA feels like a Jane’s Addiction album.

So far, the initial track “Underground” has really struck me as brilliant. No, Perry, you’ll never leave the underground, like Liz Phair, Dave Grohl, Courtney Love and so many other “undergrounders” have. Yet you’ve survived, like others who’ve refused to change haven’t — Layne Staley and Shannon Hoon come to mind, just on quick reflection.

Navarro is back to that piercing guitar solo, that searing sound that is solely JA. It’s not present in every song, but when you hear it, it’s brilliant and refreshes my soul.

The only thing missing is the fabulous Eric Avery. I don’t know what he’s doing, but I miss him. And Perry still talks a whole lot about that wife that he is so mad for — he’s such a romantic, albeit a weird one (the bizarro “Gift” was co-written and dedicated to one of his girls, Casey Niccoli, and while I watched it because it was JA, I felt kinda dirty afterward and probably showered.)

I bought the deluxe version of GEA, and it came with live versions of some of the greats. I got chills when “Three Days” started and heard a crowd cheering for them.

I so wanted to see JA at their album release party in NYC in mid-October. But I am still too chicken to go to NYC by myself and know no one who’d come with me. I am going to see them before I die, as God is my witness.