Whatever Italian the Garish Chicken has in her mottled bloodline has been ever so present since moving to New England.

Maybe it’s the people. The people here are different shades than those of Oklahoma. Not that I’m smart enough, I’ve figured out, to determine who’s what. I’m from Oklahoma. I assume everyone’s Indian. Here, we got a lot more Jewish and Italian people. I don’t know the difference. I like to think it’s because I’m a lover of all people, but it probably just means I’m an under-educated hick.

Despite my ignorance, I know there are more Italians here because the grocery stores are jam-packed with delicious Italia. The kind of stuff the foodies talk about. Real pastas, not just American Beauty or Martha Gooch (that WHORE… kidding, I don’t know anything about her). The kind that you cook al dente and go “Oh, that’s what that’s all about.” And then you know how to cook it that way, and never want mushy crap pasta again.

That's the stuff: If you can't find these, buy them on Amazon. DO EEEEET.

My first trip to the grocery store in Avon, Ct., not far from une casa, I found San Marzano tomatoes, which Giada goes on and on about on her TV show. (I don’t tend to trust skinny chefs, but she’s the exception. I’ve cooked many of her recipes and been pleased.) 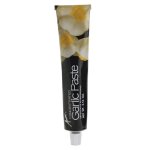 Amore Garlic Paste: I know it sounds like I'm being lazy, but this stuff is incredible. Trust me.

I’d never seen San Marzanos in Oklahoma. Here, they were $4 for a large can, but apparently that’s fairly cheap.

So I bought a large can of San Marzano tomatoes, thinking I would further adapt one of Giada’s recipes for Little Thimbles Sciue Sciue (hurry hurry) that I adore, but wish it was saucier and a cooked sauce rather than her precious raw sauce. I don’t like raw tomatoes – I know, I’m weird. I could mainline marinara, but raw tomatoes make me gag.

I also found garlic paste at the store. I’d never seen or used it before, but I thought, it’s garlic in a tube, I can’t think how that would be bad. I went to the pasta section and found ditalini from a brand called Sclafini, a Connecticut brand. They had all the pasta shapes I’d dreamed about but were hard to come by in Tulsa. Little hats, tubitini, pasta rings – but the ditalini is what’s called for in this dish, though the little hats are  quite good too.

I next went to produce and found a large container of basil for $3. Enough to curb my basil tooth. Some folks crave sugar, I crave herbs. I use a lot more basil in this dish than you probably have to.

Anyway – I went home and concocted something I thought was pretty amazing. It’s probably breaking some sort of Italian code or is the same thing as Ragu or something otherwise basic.

But this little recipe, since I’ve moved to Connecticut, has been made once, sometimes twice, a week.

The key is to use less pasta than tomatoes. You want the tomato gravy. And that garlic paste? I will die happier having found it. It’s salty and luscious. And I could use a lot of it at a time, but it’s kind of expensive so I’m moderate with it.

This one is so different than my basic sauce, which requires onions, lots of fresh garlic, wine and lots of time. But I think I like this one better, at least for now, and it’s ready in like 15 minutes, counting pasta time.

Half-bag (1 cup or so) of ditalini pasta, or some other small pasta (get the good stuff)

Fancy or unfancy Parm (your choice. I won’t judge.)

Coat the bottom of a medium skillet with olive oil. Like enough so that when you drop in the tomatoes, they will separate from the acid and oil meeting. Like enough to flavor a sauce.

Meanwhile, in a laboratory downtown… kidding, on another burner, get some pasta water a-boilin’. Add salt. I always forget, but I’ll say it this time. ADD THE DAMNED SALT. And some olive oil if you’re so inclined.

Back to the skillet. Heat on low-medium. Add the can of whole tomatoes. Let it heat up a bit, then take a wooden spoon and mash the tomatoes bits. They’ll cook down – I like mine smooth, so I stir them into oblivion. Why not buy tomato sauce you say? The whole tomatoes are so good and when they break down slowly, it tastes so fresh.

Add however much garlic you like. You can, of course, use fresh garlic. I just think this stuff is so flavorful that I can’t match that with fresh garlic. Maybe I’m doing it wrong – but I work 12 hour days and don’t have TIME TO MAKE GARLIC PASTE, OK FOODIES?

I’m sorry. I lost my mind for a minute.

Deep breaths. Squirt in the delicious no-excuses garlic paste. Add your herb mix – I love herbes de Provence, mostly because I bought a shit-ton of it and keep it in my freezer, so I just try to use it in everything. But it goes well in this sauce. Just use a little, like teaspoon or so. Add some dried basil, or if you’ve gone off the deep end like me, buy the Amore Italian herbs in a tube.

But don’t use too much – you don’t want herbs to overpower the general deliciousness of the tomatoes and garlic. Add S&P to your taste, but don’t overdo salt.

Throw your pasta in boiling water. If you bought good pasta, it will take a bit longer to cook, but you should never overcook it. Every time you overcook pasta, a darling Sicilian grandmother dies. Do the al dente thing and never look back. Again, good pasta doesn’t overcook as fast, so keep that in mind.

When the pasta’s done, turn off the heat on the sauce and let the pasta sit for a minute in the hot water – just a minute though. Tear your fresh basil into the sauce. With a slotted spoon, add the pasta directly to the sauce. If you get a bit of pasta water in it, no one would judge you. You can even thin out the sauce if you’re so inclined with a tablespoon of that water. I always keep it aside for such reasons.

Open the fresh mozz and tear it asunder and top the pasta-sauce mix. Stir it all together. The mozz will melt quickly, so serve it quickly. Top with whatever parm you have.

Another weird Connecticut thing – they have Parmeseano Reggiano pre-shredded in bags for less than $10. I’m happy here.

Seriously, this is a fast, delicious meal – I don’t even need bread with it. And I’m sure you could serve some nice sausage or chicken or something on the side, but I’m nearly a vegetarian these days, so do what you feel.